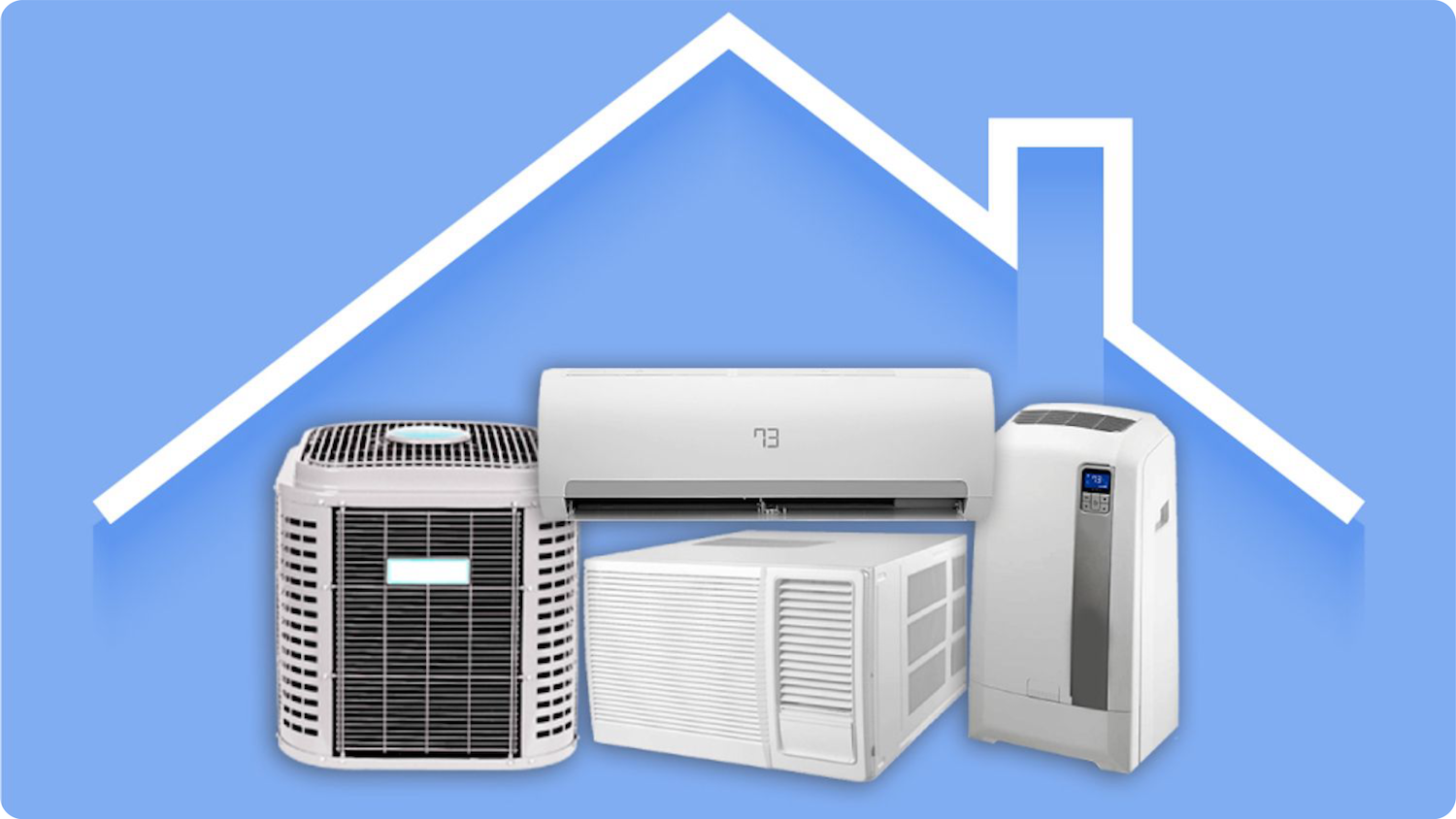 Even though there are many types of AC units, generally home air conditioning systems all have the same components, which include a refrigerant, a compressor, the expansion valve, and condenser and evaporator coils. The units range from large central systems, where the compressors are outdoors, to small units that you can easily plug in and mount on a window or place on the floor.

Understanding the difference between types of AC units comes from understanding how they work. They have basic principles by which they operate, the main one being the phase change principle. This states that a liquid expanding into gas becomes cool, whereas a gas compressing back to liquid state becomes hot. Air conditioning units use a special liquid as a refrigerant that boils at a low temperature. As it turns into gas and flows past the expansion valve, it cools the evaporator coils and all that cool air is blown into the room by a fan.

Because the humid air passes over the chilled evaporator coils and moisture condenses naturally on the coils, the AC also dehumidifies indoor air. However, different types of units handle this condensed water differently. Here are 5 types of home AC units with their pros and cons.

A window AC unit is technically called a “unitary” system, as it consists of a self-contained unit that can be easily mounted on a window or even through a hole in an exterior wall, although that’s less common. All of the refrigeration components mentioned above are in one compact box. The condenser coils are located on the outdoor side, which is where the unit ejects heat out, while the evaporator coils are on the indoor side, where the appliance blows cool air into the room.

The window units have a tray on the underside of the compact box, where the moisture that condenses on the evaporator coils drips. This makes it critical for the unit to be installed slightly tilted towards the outdoor side. If it’s tilted the wrong way, it may drip water onto the floors of your house.

Portable ACs are also unitary systems. This type of AC has a mobile, self-contained unit that you can place on the floor in any room and that you can also move around. The exhaust heat is discharged using a hose vent, which can be placed through a window vent or an exterior wall.

Similar to the window AC units, portable air conditioners have the condenser coils and the evaporator coils in the same box, which makes them slightly noisier than other AC types. The portable units are generally used to cool rooms with a surface of under 500 sq. feet.

In many instances, portable AC units are used as temporary solutions or where a window-mounted unit wouldn’t be practical. There are units with internal reservoirs that capture the condensed water, in which case these need to be emptied periodically. This is different from the window units, where the moisture simply drips to the ground.

Split AC units are also called ductless or mini-split units and they are commonly used not just in households, but also hotels or multi-unit buildings. This type of air conditioning is very popular in homes that don’t have forced-air HVAC systems, where the heating is supplied by hot-water or steam radiator systems, or even electric heating. Most of these units also have heat pumps, which means they provide not just cooling, but also heating functions.

As the name suggests, split AC units break the air conditioning system into two terminal units: one is located on the exterior and it’s called the condensing unit, while the other is located on the interior and it’s called the evaporative unit. The condensing unit contains the compressor, the condenser and the fan. The evaporative unit contains a circulation fav, the expansion valve and the evaporator coils. This is the unit that handles the air cooling and distribution.

The largest of the conventional AC units, a central air conditioning is made up of two units, just like the split systems: the condensing unit and the evaporative unit. These are connected through a refrigerant tubing.

The condensing unit is installed outside, and it’s a large box that contains the compressor, condensing coils and fan. Usually, the evaporative unit is installed in the large central chamber between the duct system and the furnace, which is called the plenum. Therefore, the AC unit uses the same ductwork and blower fan as the home’s heating system.

When it comes to cooling entire houses, central AC units are the most effective. However, one important consideration is the size of your home and the size of the system. There is such a thing as the air conditioning being too large for a home, in which case it will not properly dehumidify the air. Similarly, if it’s too small, it will not cool properly. 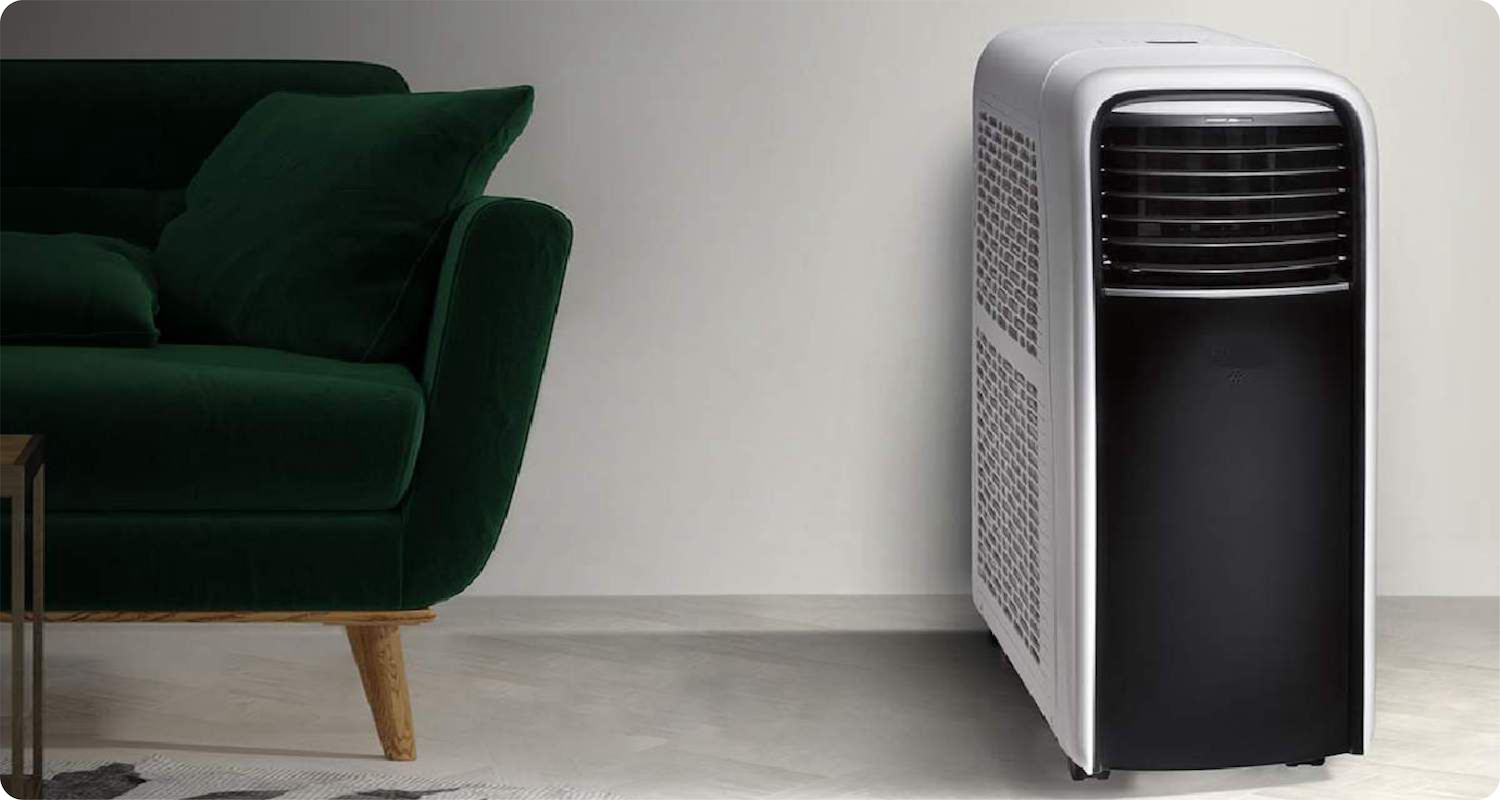 For those who prefer mini-split units but don’t really have the space for wall-mounted ACs, floor mounted units are ideal and very convenient. The indoor part rests on the floor, while the outdoor unit can be easily installed without any ductwork or major site work.

These units are ideal for any space that has tilted walls, like an attic, but also for constructions with fragile materials, such as glass. The indoor unit can be placed up to 6 inches above the floor and it connects to the outdoor unit through a small hole in the wall.

Because these cookies are strictly necessary to deliver the website, refusing them will have impact how our site functions. You always can block or delete cookies by changing your browser settings and force blocking all cookies on this website. But this will always prompt you to accept/refuse cookies when revisiting our site.